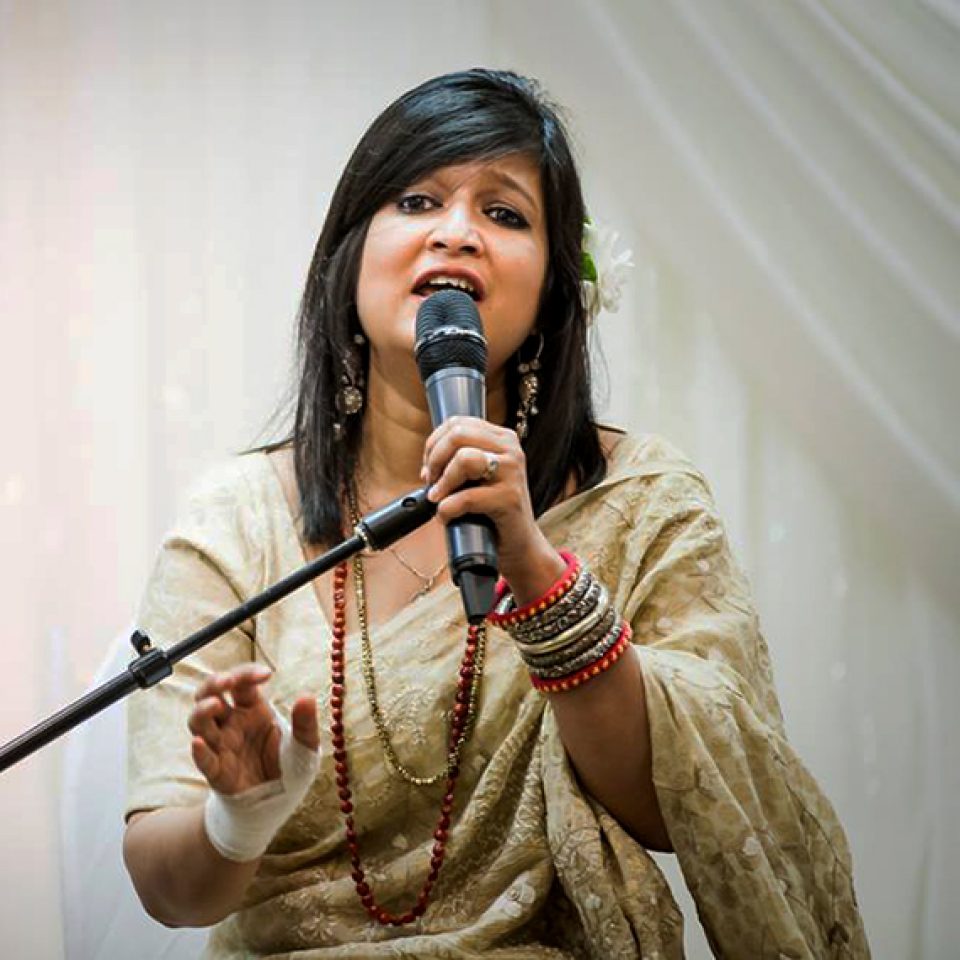 Sahana Bajpaie, better known as the namesake of a raaga (melody mode) in Indian classical music, “Sahana” to peers and music enthusiasts familiar with her work, explores that aspect of Tagore songs in her album – Notun Kore Pabo Bole – a collection of Rabindra Sangeet, which came out on March 6, 2007 has created a stir in the music scenario of Bangladesh. Sahana, born on February and was brought up in Santiniketan, West Bengal, India and started taking music lessons from her father Prof. Bimal Bajpaie – a Tagore scholar – at a tender age. He was the inspiration behind Sahana’s singing. She learnt her very first song from him at the age of three Shokatore oi kadiche shokole, a Rabindra sangeet.Her debut album ‘Notun Kore Pabo Bole’ is a tribute to him. Both her parents were professors of Political Science in North Bengal University, West Bengal, India. She was brought up and educated in Tagore’s own land, Santiniketan, West bengal, India. According to her, Growing up in Santiniketan is an enlightening experience. Sahana trained in Indian classical music and Rabindra Sangeet under Bijoy Sinha, Madhumita Roy, Chitra Roy, Shyamoli Bandopadhyay, Chandan Munshi and Mita Huq (Bangladesh) among others. Musicians she grew up listening to are Sahana Debi, Rajeshwari Dutta, KL Saigal, Suchitra Mitra, Kanika Bandyopadhyay, Krishna Chattopadhyay, Pannalal Dasgupta, Shantideb Ghosh, Debabrata Biswas, Ustad Rashid Khan, Ustad Amir Khan, Kishori Amonkar, Mallikarjun Mansur, Pandit Bhimsen Joshi, Ustad Ali Akbar Khan, Bob Dylan, Leonard Cohen, Radiohead, Mark Knopfler, James Taylor, Paul Simon, Jackson Browne, Joni Mitchell, Emmylou Harris, Bruce Springsteen, Joan Baez, Paul Robeson, among others. She is a founder member of the Bangladeshi Sufi-Baul fusion band, Bangla along with Bangladeshi musician Shayan Chowdhury Arnob with whom she went to secondary school at Patha Bhavana, Santiniketan, India. Sahana had been performing in India and Bangladesh since 1998. Her Audio CD of Tagore Songs Notun Kore Pabo Boley was released by Bengal Music Company, Dhaka, Bangladesh in 2007. The soundscape was designed and composed by the Bangladeshi music producer Shayan Chowdhury Arnob. This album was widely accepted and loved for its new take on much loved songs by Tagore. (Available on iTunes.) She had written several popular songs for the musician Arnob and performed backing vocals for his solo albums, Chaina Bhabish (2006), Hok Kolorob (2007), Doob (2008). She had performed at Alexander Hall, Canary Wharf, London, with the Bangladeshi Sufi-Baul fusion band Bangla, 2006. Sahana joined BRAC University, Dhaka, Bangladesh in May 2005 as a Lecturer in English from where she resigned in May 2008 to pursue further studies at the School of Oriental and African Studies (SOAS) in London, UK. She had found teaching to be an immensely rewarding job.Sahana sings habitually. Music is a form of a passion for her. She plays the harmonica (mouth organ), Tanpura and practices everyday.Music is a kind of a religion to me. It is the only time I feel spiritual she says. She wished she could play the harmonium but the teachers at Santiniketan discouraged them, as there is a risk for singers to be dependent on it and thus put less effort. She lives in London, UK at present and performs live.