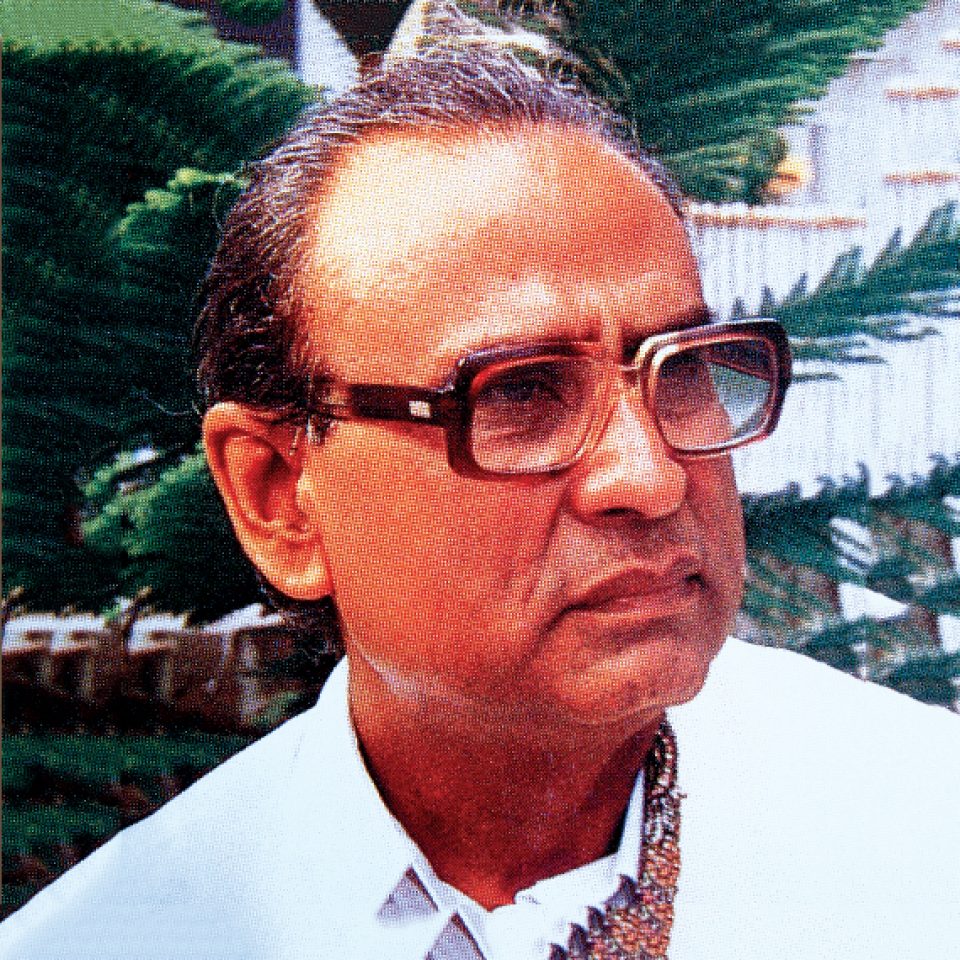 Dwijen Mukhopadhyay (born on November 12, 1927) is a singer and music director of India, who has been working in the field of music for the last six decades. He is an accomplished performer of Rabindrasangeet, Bengali basic songs, Bengali and Hindi film songs. He has recorded more than 1500 songs, of which about 800 are songs of Rabindranath Tagore. He has also directed music in Bengali feature films and composed music for popular Bengali basic songs. In the year 1944, Dwijen Mukhopadhyay made his debut as a professional singer. In 1945, he made his first recording of basic Bengali songs from Megaphone Record Company. The year 1946 was very eventful to him as in that year he not only started to act as an artist of All India Radio (AIR) but also started recording with HMV-Colombia Recording Company. In the year 1956, he entertained the soldiers of the Indian Army with his songs at Ladakh. Dwijen Mukhopadhyay received his training in music from eminent singers of Bengal including Shri Sushanto Lahiri, Pankaj Mullick, Santidev Ghosh, Santosh Sengupta, Anadi Ghosh Dastidar and Niharbindu Sen. Dwijen Mukhopadhyay was introduced to the folk music of Bengal, and Hindi film music, by the eminent film-music composer Salil Chowdhury. The friendship between Dwijen Mukhopadhyay and Salil Chowdhury started in the late 40s through their common association with IPTA. The duo gave the Bengali audience a number of masterpieces like Shyamal Barani Ogo Konya, Klanti Name Go, Ekdin Phire Jabo Chole, Pallabini Go Sancharini and many others. They worked on two poems of Michael Madhusudan Dutt(Rekho Maa Dashere Mone, Ashar Cholone Bhuli) and came up with rare and beautiful tracks. Later, Dwijen Mukhopadhyay went to Mumbai to work with Salil Chowdhury and recorded duet songs with Lata Mangeshkar for Hindi films like Honeymoon (1960), Maayaa (1961), Sapan Suhaane (1961) and solo playback in Madhumati. Dwijen Mukhopadhyay is today the foremost exponent of Rabindrasangeet. Gifted with a resonant voice, he has applied himself interpreting Tagaores songs with single-minded devotion, drawing listeners to this music within and outside Bengal. He has performed Rabindrasangeet in noted Bengali films like Kshudita Pashan (1960) – a novel of Rabindranath Tagore and Sandhya Raag (1977) under distinguished Music Directors Ustad Ali Akbar Khan and Pandit Ravi Shankar, respectively. His Rabindrasangeet in Kancher Swarga (1963), Bon Palashir Padabali (1973), Wheel Chair (1994) are landmarks. Dwijen Mukhopadhyay has also performed the famous devotional song Jaago Durga as a part of the musical play Mahisasura Mardini (The Annihilation of the Demon), which is a hugely popular radio programme broadcast by All India Radio (AIR), Kolkata, every year on the auspicious day of Mahalaya marking the beginning of the famous autumn festival of Durga Puja and may be labeled as a signature tune of the entire Bengali speaking community in the world, with a phenomenal popularity for the last 60 years. Mr. Mukhopadhyay had the privilege to sing before eminent dignitaries like Marshal Josip Broz Tito (President of Yugoslavia), Dr. Sarvepalli Radhakrishnan (President of India), Pandit Jawaharlal Nehru (Prime Minister of India), Indira Gandhi (Prime Minister of India) amongst others. As a member of Indian Cultural Delegation, he toured Soviet Union and East European countries like Poland, Romania, Czechoslovakia, Bulgaria, and Yugoslavia. He also got invited and performed in USA, UK, France, Switzerland, Australia, Canada, Singapore and Bangladesh. Dwijen Mukhopadhyay was a member of the “Experts Committee” and the “Selections Committee” at Visva-Bharati Music Board in Kolkata, which was responsible to certify the purity and authenticity of Tagore songs, sung by any artiste all over the world. He was a member of the Expert Committee of All India Radio (AIR), New Delhi that took national level audition of senior singers to promote them to Top grade Artists (Singers) of India. Currently he is the External Examiner of the Post Graduate Course in Visva Bharati University, Shantiniketan, West Bengal, India. He has created a cultural organization named Uttarayani, Kolkata, India to impart training on Rabindrasangeet. He is also the President of Bani Chakra College of Music, Kolkata, India. Dwijen Mukhopadhyay is one who has the rare privilege of celebrating the Birth Centenary of Rabindranath Tagore in 1961 and took active part in the celebration of the 150th Birth Anniversary of the great poet that held in 2011.