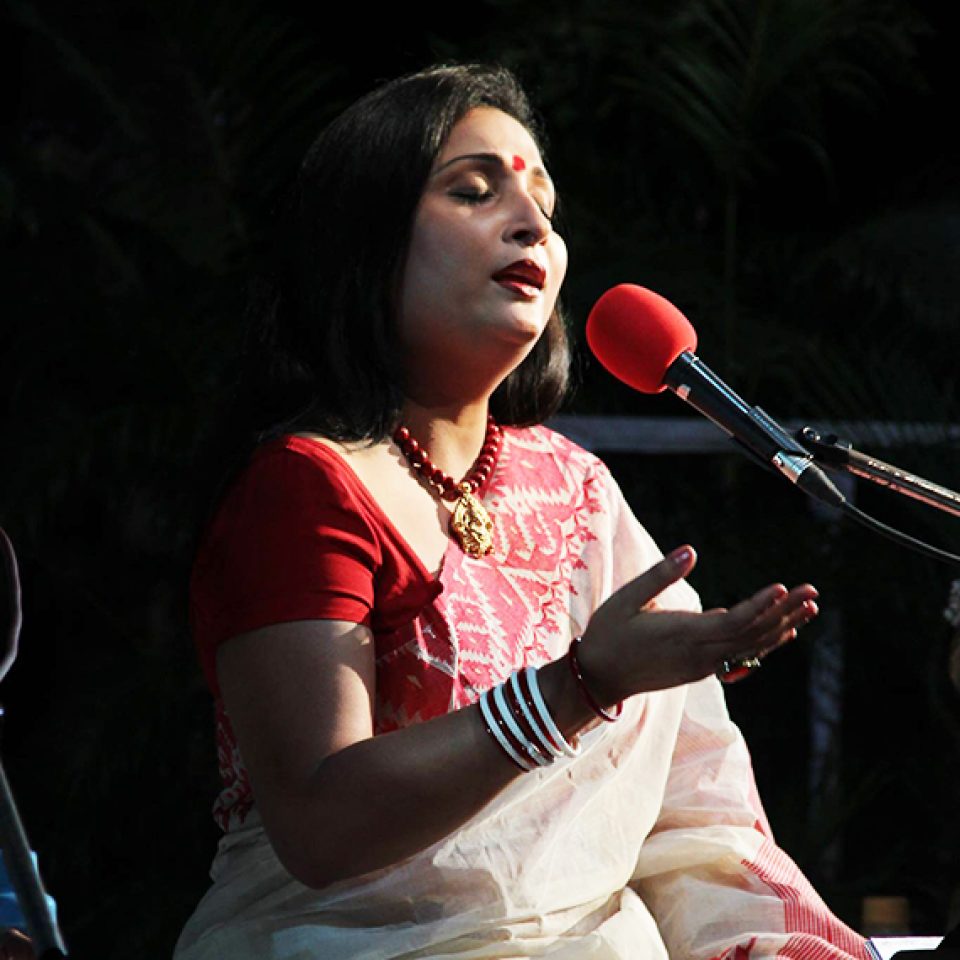 Aditi Gupta, first a Bengali to the core of the heart, was born in Kolkata with music in soul, to Dr. Durga Prosad Basu – Deputy Sherriff Kolkata High Court and Admiralty Marshall and Smt. Debjani Basu.

Completed diploma in music (Rabindra Sangeet) and stood first, from the renowned private institute of Rabindra Sangeet, Dakshinee and also received Dakshinee Puroshkar (1989), critically acclaimed as the most promising Rabindra Sangeet singer of the time to come and also won the award of Sunil Kr. Roy Smriti Puroshkar (1990). Graduated as B-HIGH from All India Radio in the year 1994. There-after was under the tutelage of noted Rabindra Sangeet exponent and Guru Shri. Rano Guha Thakurata for 11 long years, which was the turning point in life, from him realized the outstanding chemistry of lyrics and tunes of Rabindra Sangeet and how to deliver an outward sensation to audience through ones voice and understanding. Aditi did her graduation in BA with Political Science, from Calcutta University.

A regular performer for Dakshinee almost in all programs in Kolkata and other cities along the length and breadth of the country on stage and on TV channels, performing Solo Programs as a regular artiste on Doordarshan and All India Radio and other major private TV channels like E-TV (Bangla), TARA MUZIK etc.

Recorded songs for the epoch-making monumental work GITABITAN LIVE (1 & 2), a set of compact discs in CDROM format with complete Rabindra Sangeet, being sung by leading artistes of West Bengal and Bangladesh along with ready notations of each and every song and script of lyrics in both Bengali and English versions. This is a Dakshinee production.

Released Audio CD “NABIN BASANTOO AILO”, from Prime Music and others. Acted in leading female roles in Tagore’s dramas and short stories and directed as well. Has experience in anchoring various script based programs on stage and different TV channels, rendered songs in TV Serials and many a Dance Dramas on stage and TV productions. Performed Solo programs in all most all the major cities in India.

Recently working on a Rabindra Sangeet Archive and a solo audio CD for a music company.

Has duly received accolades critical reviews from critics in all major publications and magazines in Kolkata and other cities. Has been critically acclaimed as “ one of the most promising singers of the time “.

Also, spreading this eternal form of music amongst few pupils and runs a boutique SWATANTRA – A home for ethnic designer wear of own creation.