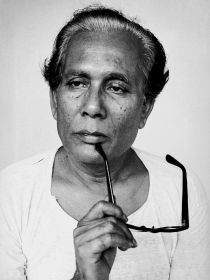 Zainul Abedin, reverently called the Shilpacharya or the guru of art, is the architect of the modern art movement in Bangladesh which began with the setting up of the Government Art Institute in Dhaka, in 1948. He was its founding principal and remained so until his retirement in 1967. For his visionary qualities and artistic achievements, he has always been the undisputed leader of the artist community in Bangladesh.

Zainul Abedin was born in Kishoreganj, Bangladesh, in 1914. He enrolled in the Calcutta Government Art School in 1933 and joined there as a teacher in 1938. The same year he did a series of watercolours on the river Brahmaputra that earned him the Governor’s Gold Medal in an all-India exhibition. Abedin developed a social realist style, often focusing on struggle and suffering as in his acclaimed ‘Famine Sketches’, which powerfully portrayed the Bengal Famine of 1943-1944. He also showed interest in marginalised communities, painting, for example, the indigenous Santhal communities, or refugees in the Palestinian camps of Syria and Jordan. An activist defending Bengali culture, Abedin was engaged in both the Language Movement of 1952 and the Bangladesh Liberation War of 1971.

When Zainul Abedin moved to Dhaka after the Partition, he felt the lack of an art school in this region. Soon, with the interests of the entire community in mind, he set about trying to make art education available to all. Since he could not achieve this only through his own artistic endeavours, he directed his attention to the creation of institutions. The large volume of art being produced in Bangladesh today will give us an indication of the extent to which his dream has been realised. His students and succeeding generations of artists set up art schools in various parts of the country including at Chittagong, Rajshahi, Khulna, Mymensingh, Bogra, Narayanganj and Narail. Abedin started an art school for children on the premises of the Dhaka Art Institute. The role of that modest venture in inspiring a trend can no longer be denied. In this way the seed that he planted in the field of art education has grown into a magnificent tree. Abedin was not only interested in the development of modern art but sought also to develop the country’s folk arts and crafts and unite them in a creative dialogue with modern art. With this end in view he set up the Sonargaon Folk Arts and Crafts Foundation in 1975. The same year he founded the Zainul Sangrahashala in his hometown Mymensingh. Abedin was awarded Honorary D Litt by the University of Delhi, India, and was appointed National Professor in 1974. He received (posthumously) the Independence Day Award in 1977. Bangladesh Shilpakala Academy conferred on him a special award in 1998, to mark the 50th anniversary of the fine art movement in the country. Zainul Abedin died in May 1976.

Several monographs, books and catalogues have been published on Zainul Abedin’s work. Bengal Foundation published ‘Great Masters of Bangladesh – Zainul Abedin’, in collaboration with Skira Editore of Milan, in 2012, which is the most comprehensive monograph to date.