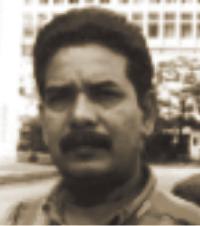 Tarun Ghosh was born in Rajbari, Bangladesh, in 1953. One of the first students to enrol in the College of Arts (now the Faculty of Arts, Dhaka University) after the country’s independence, Ghosh was inspired to look for new directions in art. He graduated in 1977. After working at the Rajshahi Art College as a teacher for a few years, he went to the MS University in Baroda, India, in 1982, for his master’s degree. A prolific painter, Ghosh received acclaim for his series on the mythical character Behula, and the Liberation War.

A renowned art director and animator, Tarun Ghosh won the Bangladesh National Film Award for Best Art Direction, for the film Kittonkhola (2000). He won the best prize at the National Art Exhibition in 1996 and a Gold Medal at the seventh Asian Art Biennial, 1997. Tarun Ghosh retired as a Keeper of Bangladesh National Museum and is now a freelance artist.