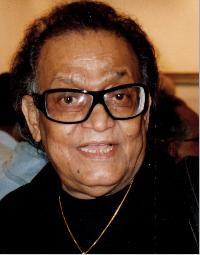 ‘From the day people begun to see me as a painter, a huge responsibility fell upon me, particularly to respond to the feelings of the people at the grassroots level who are also my viewer, as also to delve deep into the realties of life around me.”

One of India’s important post-modernist painters, Sunil Das rose to prominence with his drawing of horses. “I must have done 7000 horses between 1950 to 60,” he says. “In 1962, I went to Spain, where I was fascinated by the bull fights.” A French art scholarship with the Ecole Nationale Superieure des Beaux-Arts took Sunil Das to Europe. It was during his travels that he chanced to spend a few months in Spain, where he developed a passion for horses and bulls. His flawless drawings captured the speed, power and energy of the animals. They became symbolic of the energy, aggression and power of modern times and of his own untamed youthful spirit and a sense of liberation. Every once in a while, he painted human beings, but his depiction was skewed to a point that it almost bordered on macabre surrealism. His series on women with mysterious, tantalising eyes perhaps convey the pressures women are subject to.

Das poured himself out on the canvas, whatever be his mode of working. He never hesitated while experimenting with techniques, mediums and styles, charging his images with new ideas. He has the distinction of being the only Indian artist to have won a National Award (the Shiromani Kala Puraskar) while still an undergraduate at the Government College of Arts and Crafts, Kolkata. His works are in collections of renowned museums the world over.