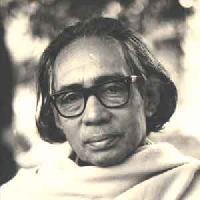 While studying at the Government School of Art, Calcutta, in the mid-forties, Somnath Hore trained under artist Zainul Abedin, and, later, printmaker Saifuddin Ahmed. A participatory, collective practice with fellow artists like Chittaprosad led to his intellectual growth. In a thirty-year teaching career, he set up the printmaking department of the Delhi Polytechnic of Art, and nurtured students at Kala Bhavana, Santiniketan.

Hore chose a distinctly formal, western style of artmaking, distinguished by its strong linear quality. The 1943 Bengal famine and 1946 Tebhaga peasant uprising deeply marked his conscience. The appeal of his bold, minimal strokes is increased by the rough surfaces, slits, and holes. Hore was the quintessential Bengal artist deeply affected by the cataclysms that changed its social history, foregrounding in his works the working class and toiling peasant, grappling with issues of survival.