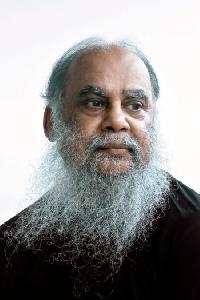 Born in Kolkata in 1947, Shuvaprasanna completed his graduation in art from the Rabindra Bharati University, Kolkata, in 1969. He was an active member of the Calcutta Painters group.
The city of Kolkata has always figured prominently in his work. His themes come from his personal interactions with its urban milieu – its sickness and sordidness, its violence and vulnerability and all that compounds its existential agony. In the 1960s and 1970s his work was influenced by the turbulence and political violence of Kolkata. In terms of technique, Shuvaprasanna has a precise, finely executed style that yields an unmistakable visual intensity. His later works focus more on divinities and flowers. His work has been exhibited extensively in India and the world over. He has been recognised for his work by the West Bengal State Lalit Kala Akademi (1978); AIFACS, New Delhi (1979) and received the ‘Banga Vibhushan’ award from the Govt. of West Bengal (2012); among many other honours.