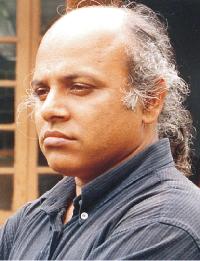 A leading realist painter in Bangladesh, Sheikh Afzal Hossain was raised in Jhenaidah, in the south west of the country, where he had ample opportunity to observe greenery and foliage, riverine life and bucolic panoramas. He is constantly stirred by the memories of rural life. Ordinary village folk, women and children have found a place in his canvas.