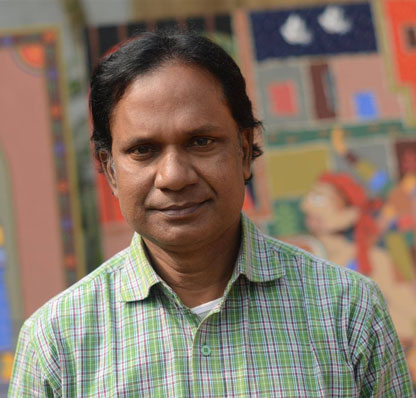 Shambhu Acharya was born in 1954. His father Shudir Chandra Acharya was a patua and mother Kamola Bala Acharya was an alpona painter. His family has been practicing patachitra or scroll painting, for more than 450 years or nine generations. The themes of their paintings are drawn from the legends of Gaz Pir, Sree Krishna, Muharram, Ramayana, Mahabharata, Manasha Mangal, Ras leela and various other lore in folk culture.

Shambhu Acharya is probably the only living potua in Bangladesh. Drawing from memory he testifies that poor nomadic (Bede) singers would provide his father Shudhir Acharya their used gamchha, a towel of sorts made of cheap thin cotton, for him to prepare the pata on. The actual preparation consisted of applying chalk powder and brick dust mixed with gum prepared from tamarind seeds to both sides of the gamchha. While the original reason for drawing patas, that is, to act out and tell stories to illiterate village folk using the pata in the background, is no longer tenable, pata remains an important source of vernacular heritage. Acharya’s contribution in the survival of this age-old art form is considerable. He has assumed the responsibility of carrying forward the family tradition of making patachitra, Acharya’s works have been exhibited at the Spitz Gallery London and are being collected by art lovers the world over.