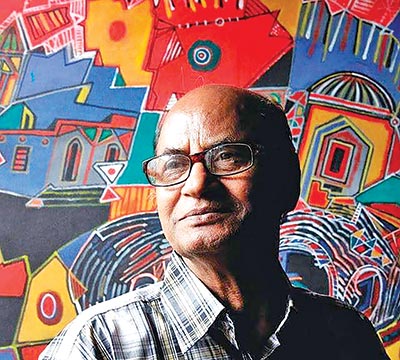 Samarjit Roy Chowdhury was born in Cumilla, Bangladesh, in 1937. He obtained a degree in graphic design from the Government Art Institute, Dhaka, in 1960. Childhood memories of the simple joys, harmonic patterns, and the cadence of rural life have found an important place in his vision as a painter. The artist’s simplified, nearly abstract language plays on a romantic vision of geometricized, angular images of kites, birds, and buntings, as well as motifs from clay dolls, lokhhi shora, pata-chitra, and other vernacular crafts. Chowdhury was inspired in this by his teachers in Kolkata, his maternal uncle who was a sculptor in wood, and his mother who did fine embroidery. At the College of Art and Craft in Dhaka (now the Faculty of Fine Arts, University of Dhaka) his artistic skill was honed by Zainul Abedin, Quamrul Hassan, Anwarul Huq, Mohammed Kibria and Safiuddin Ahmed

Samarjit Roy Chowdhury taught in the Government Institute of Fine Arts for 43 years. Following his retirement, he joined the Shanto Mariam University of Creative Design as Dean of the Department of Fine and Performing Arts, where he worked till 2010. He also served as supernumerary professor at the University of Dhaka. Chowdhury received the first prize in the Pakistan Textile Design Competition in 1960. He has received the prestigious Ekushey Padak, Shilpakala Padak and Sultan Padak for his outstanding contributions to art. His works have been widely exhibited. The artist lives and works in Dhaka.