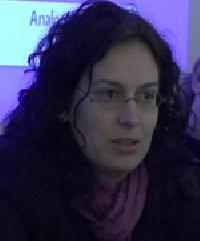 Sabrina Mezzaqui was born in Bologna (Italy) in 1964. She lives and works in Marzabotto, near Bologna. She undertook her artistic training first at the Istituto Statale d’Arte in Bologna and then at the city’s Academy of Fine Arts, from which she graduated in 1993. Her artistic debut dates back to the mid-90s. Since then, she has presented a numer of important solo exhibitions in collaboration with Galleria Massimo Minini in Brescia and Galleria Continua, San Gimignano / Beijing / Le Moulin/Paris. Sabrina Mezzaqui has also displayed her works in public spaces in Italy (Gallery of Modern Art in Bologna; Palazzo delle Papesse in Siena, Museion in Bolzano) and abroad (PS1 New York, MOCA Buenos Aires). Her works are in important public and private collections in Europe as well as North and South America.