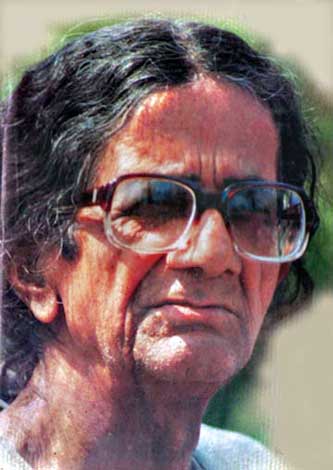 Born in Narail, Bangladesh, in 1923 and a contemporary of Zainul Abedin and Quamrul Hassan, Sheikh Mohammed Sultan (S M Sultan) is considered a leading modernist. When a young boy, a local patron was so impressed by his drawings that he insisted Sultan enroll in art school. Years later, in Kolkata, the noted art historian and critic Shahed Suhrawardy helped Sultan find a place as a student in the Government Art School. After three years of study, Sultan left school, and Kolkata, without completing his degree.

Sultan set about travelling widely in India. His time in Kashmir, especially, was to have a lasting influence on him, as can be seen in works that he made decades later. After the partition of India in 1947, he moved further afield to the United States, England and Europe. In 1973, he returned to his home in Narail where, except for a few long visits to Dhaka, he lived until his death in 1994.

Although the whereabouts of much of his earlier work is unknown, Sultan is acknowledged to have been a prolific artist. His extant charcoal and ink drawings show the artist’s playfulness in the moment of expression. His watercolours are bright and lively and feature idyllic scenes of rural life.

Many of Sultan’s striking oils frame epic narratives of the struggle and resilience of village life. He worked heavily all over his canvas without leaving any empty space. His drawings are masterful in their economy and compactness. Engaged in exploring the spirit, rather than the reality of the world that he saw around him, many of Sultan’s surviving works depict idyllic landscapes, placid animals, vigorous men, and languid, voluptuous women.

Recognition came late for Sultan. Although he had shown his work on many occasions during his travels – in 1956 for example, he participated in an exhibition at Victoria Embankment Gardens in Hampstead, London, along with Picasso, Dalí, Braque, Klee and others – the first major exhibition of his art was held in Dhaka in 1976. In the years that followed, he received the Ekushey Padak, the highest civilian honor in Bangladesh (1982), the Independence Day Award (1993) and the Bangladesh Charushilpi Sangshad Honour (1986). From 1984, he was a Resident Artist of the Bangladesh Shilpakala Academy. In 1987 the German Cultural Centre in Dhaka arranged a significant exhibition of his works. In 1989, award-winning filmmaker Tareque Masud released Adam Surat (Inner Strength) a documentary film on Sultan. The artist died in Jessore, Bangladesh, in 1994.