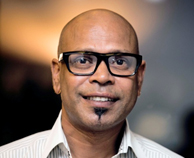 Iqbal has been using images of children in his paintings to underscore his message of peace. The realistic semi-expressionist portrayals of children’s faces testify eloquently to his deep concerns for the future of the world. Notable among his awards are the Osaka International Triennale Special Prize (1993), the Honourable Mention Award in the 11th  National Art Exhibition (1994), the Grand Award at the 10th (1994) and the 12th (1998) National Young Artists Art Exhibition, Honourable Mention Award, 11th National Art Exhibition (1994) and Japanese government Monboshu Scholarship (1999). In 2002 he received the Silver Prize at the 14th Shinwa Art Exhibition held in Okayama and the International Friendship Award at the Kyoto Arts Festival. He also received the Superiority Prize in Western style painting division at the 19th National Kyoto Cultural Festival (2004), the Grand Prize in the14th Memorial Exhibition of Aoki, Kurome City and the City Mayor Award at the Maebashi Art Camp Live in 2005. Iqbal received the Nomura Grand Prize from Tokyo University of Fine Arts in 2010. Iqbal is a member of the Faculty of Fine Arts, University of Dhaka.