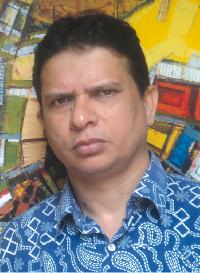 Kazi Salahuddin Ahmed was born in Dhaka in 1963. He graduated in International Relations from the University of Dhaka. Deeply connected to the old part of Dhaka city, Ahmed laments the loss of the unique urban culture afforded by the old city, complete with its separate dialect, and certain way of life marked by wry wit and the joy of closeness. This is perhaps best reflected in the architecture. The closely built structures, the intricate pattern of the roads, the doors and windows that opened directly on to the main alleys reflect the close-knit, caring community. His work, therefore, is focused on reinventing the old city. The forms, composition, colours, and the structures marked by opaque assemblage of broken geometric shapes are reflective of this central ideology.