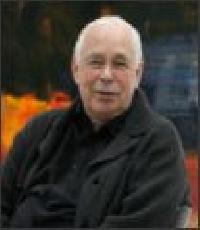 Howard Hodgkin covers a vast range of emotions in his work from the spectacular, ‘When did we go to Morocco?’ (1988-1993) with its vivid and energetic coloring…to the deeply melancholic, ‘Sunset’ (1990-1993), which features dark and heavy brushstrokes overwhelming the bright colors beneath. He tries to describe feelings and it has been the subject of much debate as to how far he succeeds.
Howard Hodgkin’s work is often recognisable by its small scale, fluid use of colour and evocative forms. He saw his paintings as objects in themselves and consistently stressed the self-sufficiency of his mark making process. He is known to work extremely slowly; often spending up to four or five years on a singular piece. His work appears to magnify the blurred intersection between time and place, drawing out the resonance of memory. He evokes potent emotions by crystalising points and places in time, using a layering process which seems to emulate concepts of past, present and future.
Howard Hodgkin was born in London in 1932. His childhood was turbulent; he was evacuated to the USA for three years during the war and on his return he attended Eton and Bryanston, both of which he ran away from. He was interested in a diverse forms of art at a very young age, collecting Indian paintings and drawings in his teenage years, a habit he funded by dealing in picture frames. He then went on to study art at Camberwell School of Art (1949-1950) and Bath Academy of Art, Corsham (1950-1954).
After finishing his education, Howard Hodgkin taught at the Charterhouse School in Surrey for two years (1954-1956). This was followed by posts at the Bath Academy of Art (1956-1966) and the Chelsea School of Art (1966-1972). Howard Hodgkin’s first painting was ‘Memoirs’ (1949) which although stylistically is very different from his later works, does hint at some of the themes he was to investigate later on, specifically the concept of memory and their collections of emotions. He had his first one man show with Arthur Tooth & Sons in London in 1962, when he was thirty. He was searching for new ways to convey his perception of reality, for example, ‘Mrs K.’ (1966-1967) describes the idea of a person rather than an exact replication of the image of a person. He uses bright colours and frequently incorporates traditional wooden frames into the painting.

Around the beginning of the 1970’s, Howard Hodgkin’s style became more spontaneous, with vaguely recognisable shapes presented in bright colours and bold forms. Painting on small-scales at first, he began producing much bigger works in the 1980’s, and built a reputation as one of the finest colorists in contemporary art. In 1980, Howard Hodgkin was invited by John Hoyland to exhibit work as part of the Hayward Annual at the Hayward Gallery along with Gillian Ayres, Basil Beattie, Terry Setch, Anthony Caro, Patrick Caulfield, Ben Nicholson and others. With later paintings such as ‘Egypt’ (1983-1984), Howard Hodgkin became more open as he travelled extensively and experimented with new ways of representing the natural world. New York became a very formative place for his career. In 1984, Hodgkin represented Britain at the Venice Biennale. In 1985, he won the Turner Prize, and in 1992 he was knighted.
In 1995, Howard Hodgkin printed the Venetian Views series, which depict the same view of Venice at four different times of day. Venice, Afternoon – one of the four prints – uses sixteen sheets, or fragments, in a hugely complex printing process which creates a colorful, painterly effect. This piece was given to the Yale Centre of British Art in June 2006 by the Israel family to complement their already-impressive collection of Hodgkins.
In 2003, he was appointed by Queen Elizabeth II as a Companion of Honor. A major exhibition of his work was mounted at Tate Britain, London, in 2006.
In September 2010, Howard Hodgkin and five other British artists including John Hoyland, John Walker, Ian Stephenson, Patrick Caulfield and R.B. Kitaj were included in an exhibition entitled The Independent Eye: Contemporary British Art From the Collection of Samuel and Gabrielle Lurie, at the Yale Center for British Art.
Howard Hodgkin aims to take snapshots from a person’s life and represent the fleeting thought, movement or feeling in his painting. His favorite subjects include the interior, the portrait and scenes from everyday life. “I would like to paint pictures where people didn’t care what anything was, because they were so enveloped by them.” Howard Hodgkin