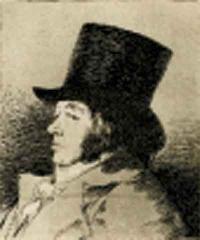 Francisco de Goya y Lucientes was born on March 30, 1746 in Fuendetodos, a small town near Zaragoza. His father was José Goya, a master goldsmith of certain prestige and his mother, Gracia Lucientes, came from a well-to-do family. He began his studies at the age of ten at Escuelas Pías in Zaragoza, where he met Martín Zapater, with whom he would begin a solid friendship that would last throughout his lifetime. Their epistolary relationship is one of the best sources of information on many aspects of the artist’s life.

At thirteen he started in the workshop of painter José Martínez Luzán, a modest artist who taught him the rudiments of art, although nothing is known about his years as an apprentice. In 1763, Goya entered the third category of a painting competition held by the Real Academia de Bellas Artes de San Fernando, but did not receive a single vote from the jury. He tried once more three years later, entering his work in the contest’s top category. He had hoped to win a scholarship to study in Rome, but again was unsuccessful.

In the face of this new failure, Goya traveled to Madrid, working with Francisco Bayeu, of whom he is said to have been a disciple. He went to Italy in 1770 and, one year later, received a special mention for the work he presented to the Accademia di Parma painting award. At the end of June he returned to Zaragoza, having received his first important commissions, which included: the decoration of the vault of one of the chapels at the Basílica de Pilar and the frescoes in the Cartuja de Aula Dei.

In 1773, Goya married Josefa Bayeu, his maestro’s sister. A year later, the painter moved permanently to Madrid, summoned by the painter Anton Raphael Mengs, possibly due to his brother-in-law’s influence, to help create patterns for the tapestries of the Real Fabrica de Santa Bárbara. Goya made tapestry patterns for the Real Fábrica until 1792.

During these years and thanks to his great skill, the painter earned the admiration of his superiors. As a result he climbed both socially and professionally, leading to his being named, in 1780, a member of the Real Academia de Bellas Artes de San Fernando and, five years later, the Sub-director of painting. On June 25, 1786, Goya was named painter to the king and on April 30, 1789, the Court Painter to Carlos IV. Throughout this decade, he came in contact with Madrid’s high society, becoming its favorite painter and working for important patrons such as the Crown Prince Luis, the Duke and Duchess of Osuna and the Duchess of Alba, among others.

In 1793, Goya fell gravely ill in Seville and, as a consequence of his illness, went deaf. Two years later, he was named Director of Painting of the Real Academia de San Fernando, a position that he would step down from in April of 1797, as his deafness made it impossible for him to continue teaching. He began work on the two frescoes at San Antonio de la Florida a year later.

During the years of the French invasion, Goya produced paintings and drawings that gave witness to the tragedy that was unfolding in Spain. Very little is known about his life during these years, although there is evidence that he traveled to Zaragoza in 1809 to see the ruins of the city at the behest of General Palafox, and that his wife died in 1812. After being widowed, he began a relationship with Leocadia Weiss, with whom he may have had a daughter named Rosario, who would go on to become a painter.

The hopes placed by Spaniards in the new king, Fernando VII, were soon dashed. He initiated a persecution of liberals and the Frenchified, many of which were Goya’s closest friends, who were forced to seek exile in France. In the face of this political situation, the painter isolated himself in Quinta del Sordo (his home in Madrid), where he painted a series of murals known as the pinturas negras (black paintings), in which he expressed his pessimism about the world with an extremely modern technique. In 1823, most likely fearing reprisals, he handed the property over to his grandson Mariano and, a year later, petitioned the king for a six-month leave from Spain under the pretext of ‘taking the waters’ in France, but with the real intention of emigrating.

On June 24, 1824, Goya moved into the home of his friend Moratín in Bordeaux, who encountered a Goya that was “…deaf, old, clumsy and weak and without speaking a word of French…so content and…desiring to see the world…” Once he had established himself in this city, the painter again took up his work from a new perspective brimming with modernity and freshness, working with a new technique, lithography.

Goya died at the age of 82 in the early morning hours of April 16, 1828. He was buried in a relative’s mausoleum in Bordeaux. Forgotten for years, Goya’s remains were brought to the Sacramental de San Isidro in 1901, before being permanently interred at the hermitage of San Antonio de la Florida in Madrid.