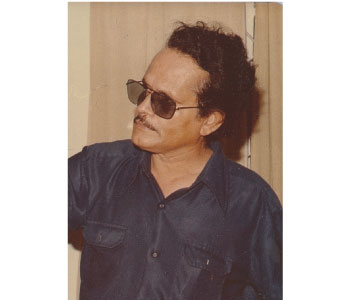 Debdas Chakraborty graduated from the Government Institute of Art in Dhaka in 1956. His painting had an elusive quality, an aggregation of forms often suggestive of human figures. One of the techniques that he used frequently was to start off with figurative images and gradually obliterate them to produce virtually abstract works. Debdas Chakraborty had unbounded faith in humanism and universalism. He was greatly influenced by liberal and secular political ideology.

Debdas received the first prize at the Warsaw International Art Workshop in 1978. Five of his engravings represented Bangladesh at the XIX International Biennale at Sao Paulo in 1987. He received the Bangladesh Charushilpi Honour award and the Ekushey Padak in 1990. An exhibition of the artist’s paintings along with a civic reception was organized by the Bengal Gallery of Fine Arts in 2001.