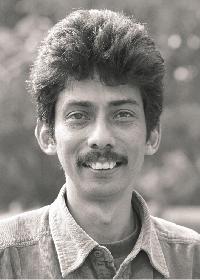 He graduated in Architecture from BUET, Dhaka in 1986. Since 1987 he has been teaching in various private universities and is currently engaged at the BRAC University. Inan pioneered the teaching of CAD in the country and has taught the subject widely. He has been involved with photography since 1966. He has conducted photography workshops at the Jahangirnagar University, Bangladesh Photographic Society, Holy Cross College and Design Inspiration. Inan has been commissioned for photography assignments by the Institute of Architects Bangladesh, Bashirul Haq & Associates, Eastern Housing Ltd., Beximco, the Aga Khan Award for Architecture and the Public Works Department. He has participated in international photography exhibitions in France, Spain, Italy and Japan and in the country at the Shilpakala Academy, Institute of Fine Arts, USIS, UNIC, German Cultural Centre, Alliance Francais, BPS, Third Eye etc. Inan was an advisor to the Bangladesh Photographic Society and is a founder member of Creative Photographers and Third Eye. He is a member of the India International Photographic Council as well. His photographs have been published in the ‘Contemporary Architecture in Bangladesh’. He was consultant for the publication ‘ A Journey Through Bangladesh’ by Anwar Hossain. Inan received prizes at the Bangladesh Photographic Society contests consistently for over one year. He received the Certificate of Merit from the Camera Recreation Club in 1986 and the Honourable Mention award in the 3rd National Photo Contest. He bagged the prestigious Institute of Architect’s Bangladesh Design Award in 2002. Aside from photography and architecture, he has made his mark as a talented scientist and sportsman. He has to his credit, first prizes at the Satyendranath Bose Memorial Science Fair in 1973, Sputnik Club Science Fair in 1974 and St. Joseph High School Science Fair Project in 1975 and emerged as the champion of the Officer’s Club Badminton Contest in 1981, 1982 and 1983.