Warning: array_key_exists() expects parameter 2 to be array, null given in /home/bfoundationadmin/public_html/wp-config.php(222) : eval()'d code on line 109 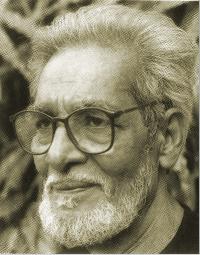 Born in 1930 in Faridpur, Bangladesh, Bijan Choudhury studied at the Government College of Art and Craft, Kolkata, from 1945 to 1949. He was expelled before completing his Diploma because of involvement with Marxist politics. In 1953 he transferred and graduated as a student of the first batch from the Government Institute of Art in Dhaka. In 1964 together with Nikhil Biswas, Prakash Karmakar, Rabin Mondal, Jogen Chowdhury and Dhiraj Choudhury he founded the Calcutta Painters to break away from the traditions of the Bengal School. In the late seventies, Choudhury became head of the Indian College of Art and Draftsmanship. Even though he left Bangladesh in 1958, he maintained strong ties with his compatriots. His paintings have narrative elements, and his imagery and symbolism are deeply poetic. Bijan Choudhury passed away in 2012.