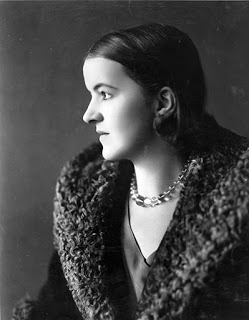 Barbara Hepworth was born in Wakefield, Yorkshire in 1903. She won a scholarship to study at Leeds College of Art where she met Henry Moore and the following year won a scholarship to study at the Royal College of Art, London. She graduated in 1924 and was awarded another scholarship to study abroad for a year. She travelled to Italy where she stayed for two years and learnt the traditional Italian technique of marble carving. In 1934 she became a member of Unit One, a group of artists and architects based in London. She married Ben Nicholson in 1938 and they moved to St Ives, Cornwall in 1939. Hepworth exhibited widely throughout her career. She represented Britain at the Venice Biennale in 1950 and in 1959 won the Grand Prix at the 5th Sao Paulo Bienal. She had retrospective exhibitions at the Whitechapel Art Gallery, London in 1953 and 1962 as well as the Tate Gallery, London in 1968. Hepworth lived in Cornwall until her accidental death in 1975.

Barbara Hepworth’s ‘Maquette for Winged Figure’ 1957 is a small-scale sculpture which was enlarged for a public commission for the John Lewis Partnership building on Oxford Street, London, inaugurated in April 1963. Hepworth’s use of bronze in the mid 1950s enabled her to experiment with increased scale and in the 1960s she worked on a programme of major public commissions including a memorial sculpture to the Secretary General of the United Nations, Dag Hammarskjold, to stand outside the UN building in New York.

Hepworth’s early work was primarily concerned with the human figure, directly carving into wood, stone and later creating sculpture cast in bronze. Her work developed towards abstraction in the 1930s and explored the relationship between the figure and the landscape. The pierced hole, a recognisable element in Hepworth’s work from 1931 onwards, was used to create abstract form and space and to connect the front with the back of the work. Hepworth’s use of strings in sculpture was a major development. She referred to the strings as ‘the tension I felt between myself and the sea, the wind or the hills.