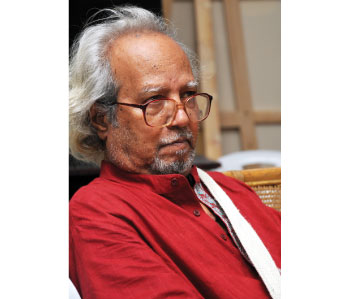 Aminul Islam was born in Dhaka, Bangladesh, in 1931. He embraced abstraction in the early 1950s, a choice he explained as an affiliation to Rabindranath Tagore’s discourse on modernity. He was among the first graduates of the newly established Government Art Institute in Dhaka (now Faculty of Fine Arts, University of Dhaka) founded by Zainul Abedin in 1948.

A modernist painter and mosaicist, Aminul Islam is also the forerunner of critical writing on art in the country. After graduation in 1953, he moved to Florence for higher study. Between 1953 and 1956 he participated in many group shows in Europe. He began to chart a new course that took him beyond sterile conventions to modernist expressions with forms, colour and perspective. His left-leaning ideologies would not allow him to entirely banish figures from his canvases. An autobiographical streak runs through many of his early works. In course of time his work became increasingly geometrically organized.

Islam taught at the Government Institute of Fine Art for 28 years and retired as its Principal in 1984. Notable among his awards are the Grand Imperial Prize at the 5th Tehran Biennale (1966), Bangladesh Shipakala Academy Award (1976, 1998), the Ekushey Padak (1981), the Bangladesh Charushilpi Sangsad Honour (1985) and the Independence Day Award (1988). Islam authored a biographical essay and, in his writings, critiqued the development of art in the region.  Aminul Islam passed away in July 2011, leaving behind a courageous legacy for successive generations.