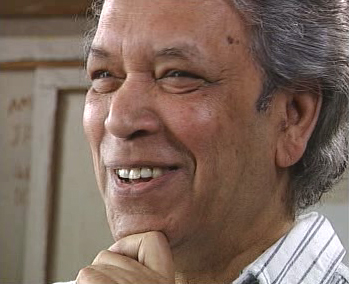 Amal Ghosh was born in Kolkata, India, in 1933. He studied at the Government College of Art and Craft with tutors who had graduated from the British Slade School in the 1930s. As a result, his artistic training was characterised by strong classical European bias which emphasised formal instruction. After moving to the UK in the 1960s, he continued to advance his studies through several post graduate degrees. Paradoxically, it was in England that he became more acquainted with his own cultural heritage. As Amal Ghosh explains in ‘Beyond Frontiers: Contemporary British Art by Artists of South Asian Descent’, ‘Cecil Collins and Alan Davie, two gifted artists and teachers, reaffirmed and valued my Indian heritage in a way that had not been possible in India’.