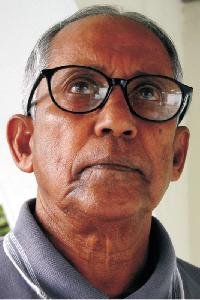 Abdul Muqtadir was born in Dhaka. He graduated in Graphic Design from the Government College of Arts and Crafts, which is now known as the Institute of Fine Arts at the University of Dhaka, in 1960. Muqtadir worked to promote and develop traditional crafts as an employee of the Bangladesh Small and Cottage Industries Corporation for fourteen years. He left this job to join Bitopi, a leading advertising agency in Bangladesh. At Bitopi, he was introduced to the world of communications and media, to which he still belongs, even after his formal retirement from his profession in 2000. Towards the end of his career in advertising, Muqtadir began his quest for a deeper understanding of life through art. He had seven solo painting exhibitions in less than two decades, an achievement that demonstrates his talent as an artist and his passion for art.