NEXT DHAKA: TWO VISIONS OF THE CITY 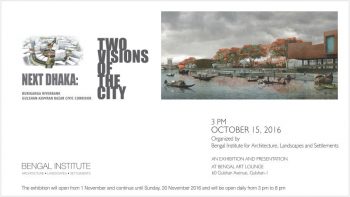 Dedicated to rethinking the urban future of Bangladesh, Bengal Institute for Architecture, Landscapes and Settlements is involved in investigating and producing alternative visions for a better, livable and brighter Dhaka.To demonstrate how Dhaka can be transformed into a city of civic, social and ecological well-being, Bengal Institute will present an exhibition of its visions for two critical areas: Buriganga Riverbank and Gulshan-Kawran Bazar Civic Corridor.

The exhibition was open from 1 November and continued until Sunday, 20 November 2016 and was open daily from 3 pm to 8 pm.
Entry condition: Open to all