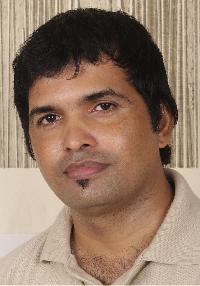 Anisuzzaman was born in Pabna, Bangladesh, in 1972. A noted printmaker, he is fascinated by the city and depicts urban architecture, construction of human habitation and the city’s morphology in highly geometricized compositions. Nostalgic and poetic, his life size woodcuts dissect facades to reveal the stark, brutal, and sometimes beautiful reality of human progress.