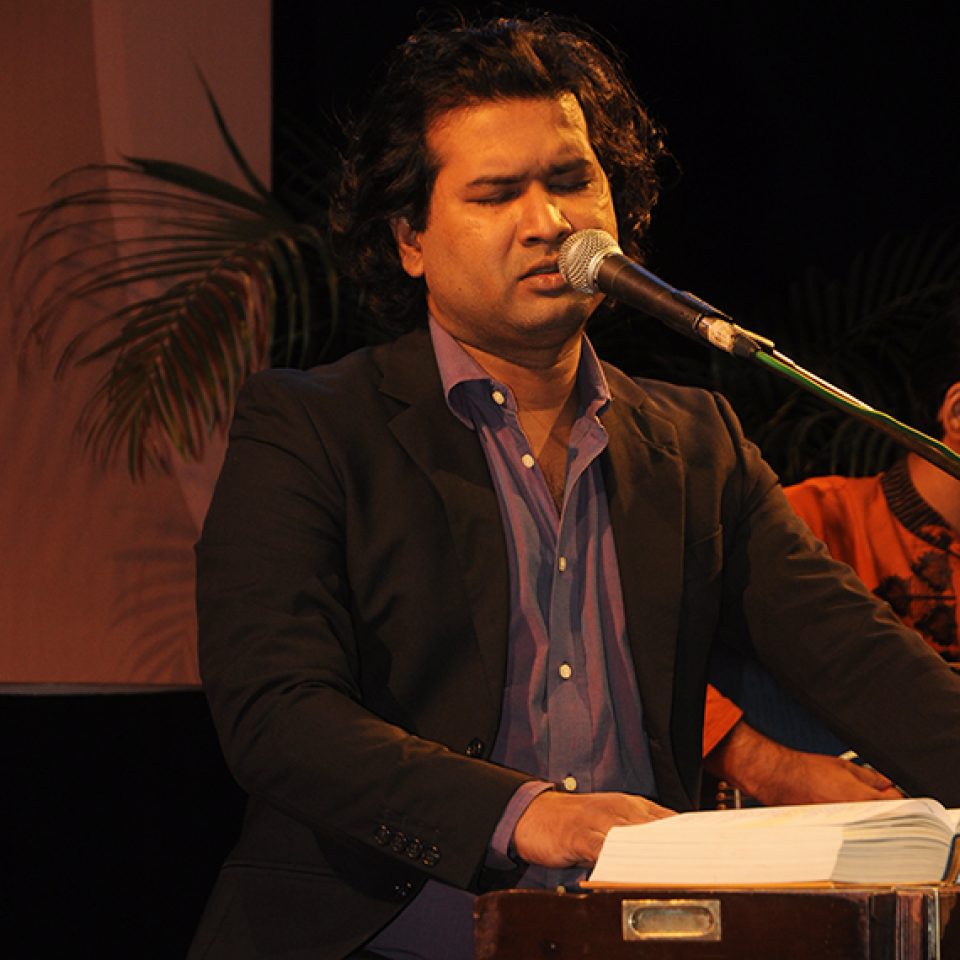 Swani Zubayeer One of the very few truly music educated composers of Bangladesh, Swani Zubayeer earned his Masters Degree in Western Classical Composition from the Royal University College of Music in Stockholm, Sweden. He received training in Indian Classical Music from Ustad Mazhar Ali Khan and Ustad Jawad Ali Khan, famous grandsons of the Bade Ghulam Ali Khan of Kasur Patiala Gharana. His talents in Bangla Songs compositions have been expressed in the two albums he produced. About Swaani Zubayeer : Swani Zubayeer was born December 2 , 1973 in Dhaka, Bangladesh. He was fortunate enough to spend most of his childhood at his grandfather’s house – who was an eminent poet of the country: poet Mainuddin. The poet’s house was full of music and literature which made a deep impression in the young Zubayeer’s mind. Thus he had a strong leaning and an innate understanding of artistic writing and literature… Swani’s mother also was a writer and father had studied Bengali Literature at Dhaka University. When it comes to formally learning music though Zubayeer was a late starter. Though his interest in music was noticed by family and friends very early on in his childhood, Swani’s own dreams were to play soccer professionally untill the age of 17 when he had to stop after a severe knee injury. His first musical guru is Shree Gobido Ravi Das with whom he started to the basics of Indian Classical Vocal Music at the age of 17. In 1992 he went to India to study English literature in Kumaun University, Nainital. The natural beauty of Nainital with its mountains and lakes put a deep impact in the artistic upbringing of Zubayeer. In 1993 he had the great fortune to become the desciple of Ustad Mazhar Ali Khan and Jawad Ali Khan who are the grand sons of the greatest vocal maestro of 20th century; Ustad Bade Ghulam Ali Khan(1900-1968).Since then Zubayeer has been developing his singing in a recognised style namely the Patiala Style of singing. In 1995 he came back to Dhaka and enrolled himself in the department og english, University of Dhaka. He completed his Masters in English literature in 1996. In 1997 he made his debut concert in National museum auditorium, Dhaka. Since then he became a professional singer. It was in 1997 when he made contact with prof. Bill Brunson,Department of composition of the Royal University College Of Music in Stockholm(K.M.H.) Zubayeer was looking for a possibility to study composition. Due to his lack of knowlege in various arias of western classical Prof. Bill Brunson referred his application to Gotlands School of music composition, Visby, Sweden in order to deepen his knowledge so that he could apply to the K.M.H. Zubayeer completed his two years diploma in composition from Gotlands School of Music Composition. In 2001 he was accepted by the board of composition department after a strong competition to study in the composition department. On June 9, 2006 Zubayeer got his certificate; Master in Music. In the news: (taken from The Daily Star’s Web Edition Titled: “Swani Zubayeer and his melodies” by Elita Karim) According to this young musician, ‘composer’ is too powerful a word to describe himself. However, the recent ghazal night held at the National Museum proved otherwise for Swani Zubayeer. This visionary young musician enthralled the Dhaka crowd with his mesmerising voice and heart-warming expressions. Besides performing a few popular ghazals of this time and also the years gone by, Zubayeer rendered several of his own ghazal compositions as well. One of them included a number called Aaj amaar mon bhalo nei. Through this composition, Zubayeer drew a clear sketch of the time when he had lived on the island in Sweden, attended music classes and sometimes peered at the grand piano. His heart would go out to the Baltic Sea and the blue sky when he would look out of the window, and long to be back with his loved ones. Another ghazal number titled Ridoy spoke of the usual innocent fantasies of the heart, giving them a soothing touch. In the middle of the show, his paternal aunt Kausar Habib who had come all the way from London, rendered a few of her own favourite numbers and drifted the mind of the audience for a while. Both Zubayeer and his aunt Kausar seemed to be ardent fans of the eminent singer Kumar Biswajeet, who was present at the show, and spoke of his contribution to the Bangladeshi music, giving the country an international mark. Born in 1973, Swani Zubayeer received his M.A degree in English literature from Dhaka University, after which he went on to Sweden to study music and was the student of Gotlands School of Music Composition. His first album ‘Saara’- a collection of Bangla modern songs was released from Betar Jagath in 1998, followed by ‘Apana Khayal’- a collection of ghazals released from Bombay in January from Sun Audio and ‘Nirjon Shakkhor’- an album of Bangla modern songs released from World Music, Bangladesh in 2003. In the same year, Zubayeer was commissioned by Sundsval Symphony Orchestra for an orchestral work, titled The Golden Land which premiered on January 26. Based on the six seasons of Bangladesh and their varied aspects, Zubayeer composed this symphony where the blending of the east and the west was evident. A video of the symphony was also shown on the projector for the audience to enjoy. Swani Zubayeer wants to come up with more compositions in future filled with more passion, expression and creativity. He quotes from Xenakis, ‘We all have to try, because only after that there is always a difference.’