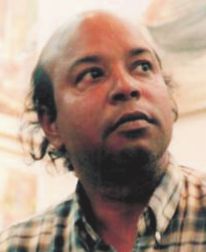 Tajuddin emerged as a painter in the seventies, a time when the country was in the throes of the freedom movement. The painter has been living and working in Toronto, Canada, since 2008. He is not inclined to regard art as an object; it is the spirit of the human condition. The artist’s earlier abstract expressionist works are textured, using subdued colours and tones in response to Dhaka’s social realities and its dense urban structure. His recent works are populated with tiny object-like forms. Even myths, symbolic patters and suggestive semi-nude figures appear on his otherwise abstract painted spaces primed with rough textures. Ahmed’s works have been widely exhibited.