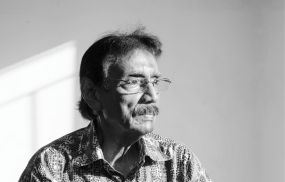 Syed Jahangir was born in Satkhira, Bangladesh, in 1935. He graduated from the Government Institute of Art and Craft in 1955. In 1958, he received a Ford Foundation Fellowship and travelled to the USA, where he became familiar with the works of American artists. After his return to Bangladesh in 1973, the interconnectedness of humans and nature became a recurrent theme in his work. A tireless traveller through life with a keen eye for detail, his preference for blues and ochres lends an extraordinary richness to his singular brand of abstraction.  An avid reader and affable conversationalist, Jahangir joined the Bangladesh Shilpakala Academy as the departmental head in 1977, after a stint of 22 years as a free-lance painter. During his tenure, the Academy launched two important initiatives, a national mobile art exhibition and the first edition of the Asian Art Biennale of Bangladesh. A prolific painter, Jahangir exhibited and travelled widely. Notable among his awards are the Shashi Bhushan Honourable Award (2005), Sultan Smrity Gold Medal (2005), Sultan Padak (2004), Michael Madhusudhan Academy Award (2000), Bangladesh Charushilpi Sangsad Honour (1992), Ekushey Padak (1985) and the Honourable Mention Award in the 1st National Art Exhibition (1975).

After his death in 2018, he was laid to rest in his village.