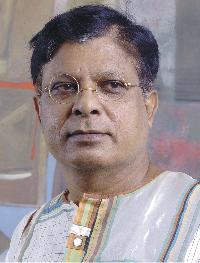 Swapan Chowdhury is a firm believer in art for art’s sake. He does not think one has to actively try to present a social or political message through art. The political and cultural movements leading up to the Liberation War of 1971 played an important role in his life. His active participation in the war helped define his artistic vision. In 1971, he organised and participated in art exhibitions in India and abroad to uphold the cause of the war. As a member of the Artists’ Association he went around singing to refugees and freedom fighters living in camps.

Chowdhury graduated from the College of Arts and Crafts, Dhaka, in 1970. He is an avid singer and a music director. His son Arnob, a renowned singer and musician, has carried the legacy forward. Chowdhury’s works have been exhibited widely in India, and at home. He received the Best Award in Oil Painting at the 2nd Young Artists Art Exhibition, Bangladesh Shilpakala Academy, in 1976, and the Honorable Mention Award at the 13th National Art Exhibition, Bangladesh Shilpakala Academy in 1999.