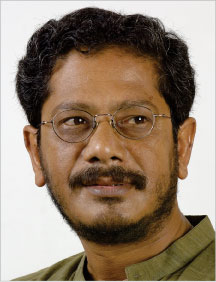 Shishir Bhattacharjee was born in Thakurgaon in 1960. His paintings, critical of the political establishment but always in a satirical fashion, were first seen in the 1980s. His political cartoons appear regularly in daily newspapers in Bangladesh. Bhattacharjee graduated from the Institute of Fine Art, University of Dhaka, in 1983. He received his master’s in Painting from the M S University of Baroda in 1987. He is a member of the Faculty of Fine Arts, University of Dhaka. He has been invited as guest teacher at Slade School of Art in London. His style as a political caricaturist has now given birth to a new generation of illustrators who follow his style.

Bhattacharjee led the influential genre-breaking group of alternative artists ‘Shomoy’ that appeared in the 1980s and were considered the third wave of artists in Bangladesh. His works have been widely exhibited.