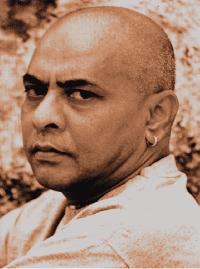 Shahid Kabir was born in Barishal, Bangladesh, in 1949. His subjects, drawn from real life experiences, are depicted in mild impasto and a painterly fluidity, and the result is both evocative and sensuous. His empathetic stance and powerful insight have established him as an important painter and printmaker in Bangladesh.

Kabir graduated from the Government College of Arts and Crafts in Dhaka in 1969 and attained fame for his series on Lalon and Baul as early as in the 1980s. He left for Spain in 1981, only to resurface in the Dhaka art scene in 1997 after a gap of 17 years. The formative years spent in Europe added a fuller dimension to his earlier practice. And as he came back home, he did so with gusto introducing a simple idiom that thrives on depiction, or rather, on creating an impression of every-day reality and objects. Water vessels, teapots, flower vase and rotten fruits thus serve as metonymic reference to a world where one roams with empathy as guide. Brick fields, riverscapes and working women also appear in his paintings. The overall look is faded and unembellished, evoking a sense of pathos.

Notable among his awards are the Carmen Aroshamduzamena Prize, Madrid (1984). He taught in the Government College of Arts and Crafts, Dhaka, for nine years, until 1980. Kabir is a freelance painter who divides his time between Dhaka and Madrid.