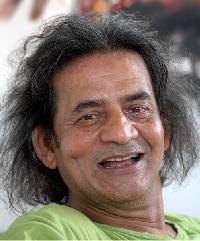 Shahabuddin is a Bangladeshi painter of international repute. He was born in Narshingdi, Bangladesh, in 1950. He studied at the College of Arts and Crafts (now, Faculty of Fine arts, University of Dhaka) and obtained his bachelor’s degree in 1973. Joining the liberation war as a platoon commander had left a lasting impact on his art. Shahabuddin has been living in Paris since 1975, the year he obtained a scholarship at Ecole des Beaux-arts de Paris where he went for higher studies. Known for his bold representation of muscular men leaping across decontextualized infinite expanse of space, the painter’s work has once featured among the stalwarts in the Olympiads of the Arts, Barcelona, in 1992.

Shahbuddin exhibited in many galleries across the globe including the Olympic Museum in Lausanne, Switzerland and Bourg-en-Bresse Museum France. As he often divides his time between Paris and Dhaka, on the home front, he received Best Award in Painting, Young Artists Art Exhibition, in 1982; Honourable Mention Award, in the 3rd Asian Art Biennale, in 1986. He received the Independence Day Award in 2000. The Paris-based artist was conferred, in 2014, the much-coveted Chevalier De L’ordre Des Arts Et Des Lettres (Knight in the Order of Fine Arts and Humanities) by the French government.