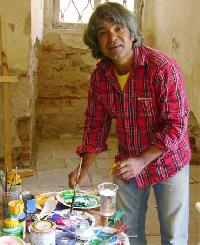 Ruhul Amin Kajol was born in 1956, Mymensingh, Bangladesh. He studied Ceramics from 1973-1976 and obtained his BFA degree from the Institute of Fine Arts (presently Faculty of Fine Arts), University of Dhaka, in 1982 in Drawing and Painting. Since 1986 he has been living in Denmark. Ruhul Amin Kajol earned critical acclaim during the seventies and eighties for innovative and individual style of figurative works. He started his Street Art, called Traffic Art, in Sweden in 1994 and created a Guinness Record as world’s longest painting in the category of ‘Biggest Street Painting’. He has produced Traffic Art in 12 different countries of Europe, Asia and America. In 2003 he received a special honour from the University of Development Alternative, Bangladesh for his street art depicting the Language Movement of 1952. His commission works include more than 20 projects in Europe and Bangladesh. Among them, the best known was the ‘Bamboo Sculpture’ project in Denmark and Bangladesh. Presently he is working as an art teacher in an art school in Denmark and is also a freelance artist.