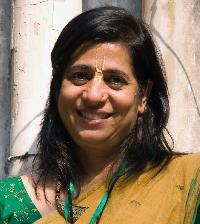 The deceptive simplicity in Rokeya Sultana’s formal arrangement, which sometimes exploits the elements of naïve art, the juxtaposition of paint areas, the dynamic colours and flowing lines, and her delicate attention to details combine to give her work an immediate strength. Her art is a reflection of loss and displacement, and the impermanence in life. She was influenced in her formative years by the tumultuous 1971 revolution that created Bangladesh, and the evolution of a strong cultural identity in her country’s art and society. She addresses issues of womanhood and the power of intuition and imagination that can be a feminine attribute that moves into universal truths. Through a symbolic personal language, she expresses such metaphysical perceptions as women in communion with nature, who lead the next generation, becoming the key to the world. Widely known for her figural series Madonna and Relations, her abstract landscapes in the Earth Water Series, and her print series Fata Morgana, An accomplished and international award-winning printmaker and painter, Sultana divides her time between her studios in Sydney and Dhaka.