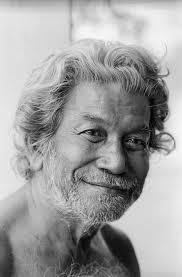 (26 May 1906 – 2 August 1980) was an Indian sculptor and painter, one of the pioneers of modern Indian sculpture and a key figure of Contextual Modernism.

Baij was born in an economically modest family in the Bankura district of the modern state of West Bengal in India. In that sense, he was a Bengali, not an Adivasi, as many people usually think. The surname Baij derived from Boidda and Boijo consequently. His family surname was Poramanik and was abandoned by him in the early 1925. However, many of his artistic creations have been inspired by the lifestyles of rural dalit or Adivasi (Santhal) communities living in and around his place of work Santiniketan.

While in his mid-teens Ramkinkar used to paint portraits of Indian freedom fighters involved in the Non-Cooperation Movement against the British rulers of India. At age of 16 he got noticed by the renowned journalist Ramananda Chatterjee. Four years later Ramkinkar joined the Visva-Bharati University at Santiniketan as a student of fine arts. After obtaining a diploma from the university he went on to head the sculpture department. Eminent painters like Beohar Rammanohar Sinha and Jahar Dasgupta, both students of Shantiniketan were his disciple.