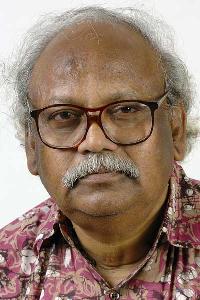 Gifted with an eye for details, Nabi is known not only for his paintings, engravings and drawings, but also for scathing and witty cartoons. In painting, Nabi’s primary references include people or animals depicted against a natural setting. From printmaking to painting, watercolour to oil or acrylic on canvas, in most of his forays there appears a tendency to capture the rural landscape or the lives of the toiling masses.

Ra Nabi, his pen name as the creator of the character Tokai, is enthusiastically inclined to depict stories of social relevance. If in his cartoons, including the famous Tokai series, he came off as a witty, acerbic character who constantly grappled with the anomalies of life, in his prints and paintings he always sought to achieve tranquillity, which is usually associated with bucolic nature.

Born in 1943, in Chapai Nawabganj, Bangladesh, Rafiqun Nabi, developed a fascination for art during his school days in Old Dhaka. In 1954, his father, a police officer who was also an amateur painter, took him to see an art exhibition held at Burdwan House (now Bangla Academy). It was there that he felt a stirring within.  He started practicing at home and was fascinated by David Low’s cartoons.

After his graduation from the College of Art and Craft in Dhaka, Nabi started teaching in the painting department of the college in 1964. In the wake of the uprising of the sixties against the Pakistan junta, young Nabi, like many other students, participated in social activism promoting Bengali nationalism. Nabi went on to study printmaking in the Athens School of Fine Arts in 1973 under a post-graduate scholarship programme.