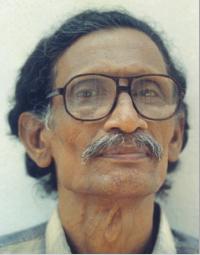 The son of a mechanical draughtsman, Mondal took to drawing and painting early in his life.  The Bengal famine in 1943 and the Calcutta communal riots of 1946 deeply impacted him, and he joined the Communist Party. However, art became his final refuge and ultimate means of protest.

Having subverted the classical canons of harmony and beauty, Mondal invented a language in paint that could express his anguish and rage towards the decadence and frequent inhumanity he witnessed. The expressionist use of splattered colours, bold application of black, and figures that are static and totemic, represent human figures that struggle to live a hero’s life in a mocking but tragic world. Mondal’s art is typically known for its inspiration from primitive and tribal art and for its potent simplifications and raw energy. Beginning his career as an art teacher, with a stint as an art director in films, Mondal was a founder member of Calcutta Painters in 1964, and from 1979-83, a general council member of the Lalit Kala Akademi. He passed away in 2019.