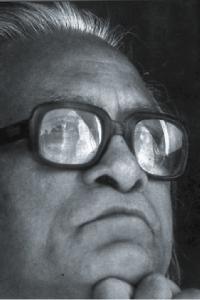 Quamrul Hassan was born in 1921 at Bardhaman, West Bengal, India. He graduated from the Government Art School, Kolkata, in 1947. Strongly influenced by Guru Saday Dutt’s Bratachari movement which called for rejection of and expressions of resistance against British colonial rule, and re-establishing the Bengali heritage, he continued to hold on these ideals until his last days. It was here at the Bratachari camp that he came across the traditional pata artists of Bengal. He was attracted to the style, especially the use of basic colours and their renditions of life in rural Bengal. A political awareness born of a deep attachment to the homeland, which grew and strengthened over time, was manifest in both his personal life, as well as in his paintings. Hassan played a leading role in establishing the Government College of Arts and Crafts (presently the Faculty of Fine Art, University of Dhaka) with Shilpacharya Zainul Abedin and taught there until 1960. The East Pakistan Small and Cottage Industries (later Bangladesh Small and Cottage Industries BSCIC) was established under his leadership in 1960. As the head of the Design Centre of BSCIC he worked tirelessly to invigorate artisanal practices and crafts enterprises, until his retirement in 1978.

Quamrul Hassan’s subjects range from colourful pictures depicting a pristine, rural Bengal to a politically corrupt, degenerate one. His ability to combine traditional pata painting techniques and folk motifs in a modern paradigm earned him the name of ‘Patua Quamrul Hassan’. His fierce political cartoons inspired the people in civil movements and demonstrations, particularly during the Liberation War of 1971. Two of Hassan’s works have come to be part of Bangladesh’s political history. The first of this is a monstrous rendition of Yahya Khan, the Pakistan president who ordered genocide in Bangladesh. The second was just before his death, mocking the then dictator of Bangladesh, Hossain Mohammad Ershad. His contribution is enshrined in his designs of the state monogram of Bangladesh, Bangladesh Parjatan Corporation, Bangladesh Bank, and Biman Bangladesh Airlines.

Hassan received the President’s Gold Medal in 1965, Comilla Foundation Gold Medal in 1982, Independence Day Award (highest civilian award instituted by the Government of Bangladesh) in 1979, Bangladesh Charushilpi Sangshad Award in 1984, and Mahbubullah Trust Gold Medal in 1987. Quamrul Hassan worked as a free-lance artist until his passing in 1988.