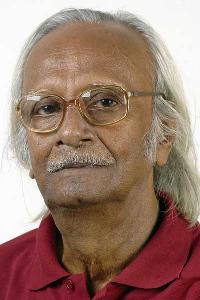 Qayyum Chowdhury was born in Feni, Bangladesh, in 1932. He graduated from the Government Art Institute, Dhaka, in 1954. His decisive contribution to the pre- and post-independence cultural firmament made him a household name. The cultural figure that he became was linked with his organic engagement with graphic design and painting. And in both arenas, his easily recognizable motifs and imagery, inclined to evoke the rural, help to conserve his reputation over the decades. As he was particularly interested in a crucial aesthetic stratagem of employing forms and lines to forward a deshi brio of his own making, his paintings were often considered an extension of his graphic sensibility.

Chowdhury was a noteworthy illustrator and graphics designer and won the National Book Center Prize for best cover design for ten years in a row. He taught at the Institute of Fine Arts, University of Dhaka, for 37 years and retired in 1997.  He died on November 30, 2014, after collapsing on the stage during a music festival.