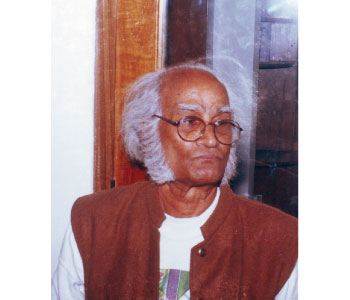 Drawn to art through the pages of the Bengali art journal Prabasi, Paritosh Sen ran away from his home in Dhaka, Bangladesh, to learn art in Madras. The Calcutta Group held its only exhibition in 1942, with Paritosh Sen as a founder member.

It was Sen’s visit to Paris in 1949 that changed his outlook. Meeting Pablo Picasso was a turning point in his life. The period after his return to India, in 1954, saw him teaching, producing paintings with themes influenced by everyday life. Sen’s visits to Europe and China in the sixties enriched his vocabulary. His spontaneous response to the traumatic socio-political changes in West Bengal in the seventies resulted in a series where along with large canvases he installed a papier-mache sculpture, an inspiration drawn from his travels in Mexico and Egypt.

Sen wrote on art for leading English and Bengali journals. The French government conferred on him the L’officier de l’ordre des arts et des lettres and Lalit Kala Akademi honoured him with the title Lalit Kala Ratna in 2004.