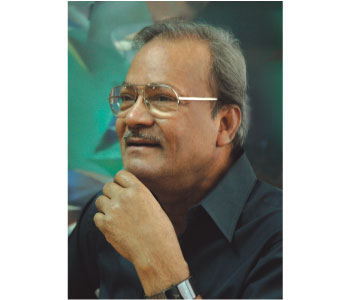 Nitun Kundu was an artist, sculptor and entrepreneur, known for bringing new trends in modern art. He is also remembered for pioneering the use of integrated wood and metal furniture. Nitun Kundu graduated from the Government Art College in 1959, topping the class that year. In 1975 he established Otobi, a furniture company featuring his own designs. Within a short while Otobi became the most prominent Bangladeshi furniture brand, emphasizing the young nation’s pride in its newly found post-independence identity. Otobi remains one of Bangladesh’s top export brands.
Sabash Bangladesh at Rajshahi University, Sampan at Chittagong Airport, Sangsaptak at Jahangir Nagar University and SAARC Fountain at Karwan Bazar, Dhaka, are noteworthy among his public sculptures. Nitun Kundu received the Ekushey Padak in 1997.
He last participation in a group event was in June 2006 at the Dhaka Art Camp at Savar, organized by Bengal Foundation. Widely remembered for his dedicated cultural activism and significant contribution in business, Nitun Kundu passed away in September 2006. A retrospective of his works, titled The Creative Mind, was organized by the Bengal Gallery of Fine Arts in 2007.