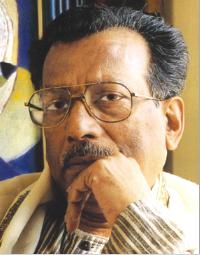 Niren Sengupta was born in 1940, in West Bengal, India. A product of Kolkata’s Government College of Art & Craft, he retired as the Principal of the College of Art, New Delhi. Sengupta is a member of the Calcutta Painters and holds a position in the Academy of Visual Media, New Delhi.

Sengupta’s focus is on spiritual themes favouring Buddhist legends. He finds lasting beauty in the serenity of the total surrender of the monks of the Ramakrishna Mission, a calling that signifies sacrifice and service to humankind. Influenced by the idiom of sculptural planes, the artist’s figures are chiseled, and the space around it is filled with coloured geometric shapes. Awards to his credit include the AIFACS Award, Mahakoshal Award (Bhopal), and NBT Award, New Delhi. Niren Sengupta lives and works in Delhi.