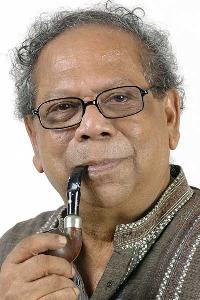 Murtaja Baseer was born in Dhaka, Bangladesh, in 1932. His father Dr. Muhammad Shahidullah was an illustrious linguist, philologist, educationist, and teacher. After completing his graduation from the Government Art Institute, Dhaka, in 1954, Baseer moved to Florence. He studied fresco at the Accademia di Belle Arti in Florence (1956-57), mosaic at the Ecole Nationale Superieure des Beaux Arts in Paris, and aquatint at Academie Goetz in Paris (1972-73). In Florence he was influenced by the pre-Renaissance painters such as Giotto, Cimbue, Duccio and others. These influences would stay with him throughout his career. His creative talents flourished in diverse forms and modes of expression, although a marked propensity for abstract realism is found in his work. Baseer was active in left politics during the 1950s and was sent to prison by the erstwhile Pakistan government. A leading figure in Bangladesh art, Baseer often worked in phases, producing a series of works, such as Epitaph (dedicated to the martyrs of the Liberation War of 1971), Wings (magnified details of the wings of butterflies) and the more somber Wall. Baseer was also a poet, short story writer, novelist, researcher, numismatist and filmmaker.

Notable among his many awards and accolades are the Prix National, Festival of Painting, Cagnes-sur-Mer, France (1973), the Bangladesh Shilpakala  Academy Award (1975), the Ekushey Padak (1980), the Bangladesh Charushilpi Sangsad Honour (1989) and the S M Sultan Padak (2003). He was a nominator for the Fukuoka Cultural Prize Committee in Japan (1992 to 2004) and taught in the Department of Fine Arts at the University of Chittagong (1973 to 1998). Baseer passed away on August 2020.