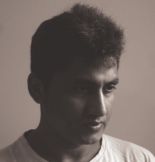 Mozai Zeevan Safori, is devoted to expressing his love of beauty through his art. He is also a philosopher and spends much of his energy on contemplating the changes which mark his time. He silently creates a parallel world, which is no less valuable to the physical one. Zeevan is a keen observer of the impact of art on society, specifically the evolution of traditional arts alongside that of lifestyle. The artist is very proud of his mother tongue and is strongly influenced by Bengali folktales, mythology and traditional allegory, which are all recurrent themes in his artwork. Zeevan is involved in the Federal Artists Union of Bangladesh and World Village of Art movement.

Md. Zahidul Islam. Passed S.S.C in 1987 with a First Division from the Board of Secondary and Higher Secondary Education, Jessore and Bachelor of Fine Art in Drawing and Painting in 1992 held in 1996 with a First Class from the then Khulna Art College under the University of Rajshahi.

His artworks are in the collections of Dhaka University, Jessore Science and Technology University and the Jessore Press Club as well as many private collectors in Bangladesh, India, Sudan, Saudi Arabia, Sweden, England, Australia and the United States of America. The artist currently lives in Jessore and has his studio there.