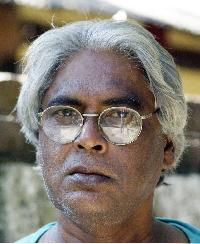 Monsurul Karim was born in Rajbari, Bangladesh, in 1950. He completed BFA from the Institute of Fine Arts, University of Dhaka, in 1972, and did his master’s from University of Chittagong in 1974. His semi abstract compositions with loosely drawn figures, organic and free flowing lines, and child-like drawings and scribbles powerfully evoke the landscape of riverine and rural Bangladesh.

Karim received the Ekushey Padak in 2009. Notable among his honours are the Grand Award in the 8th Indian Triennial International, New Delhi, 1994 and the Grand Award in the 6th Asian Art Biennale Bangladesh,  Dhaka, 1993. Karim retired as Professor, Institute of Fine Arts, University of Chittagong. He now lives and works in Rainagar, Rajbari, where he has set up an art space for students and young artists.