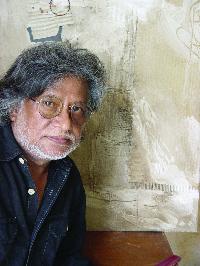 Whatever technique you follow, you must return to nature as your source for any creative pursuit. Nature is the ultimate mentor.

Monirul Islam is a pre-eminent printmaker. Brilliant in their humane expression, his abstract works with geometric motifs, subtle use of lyrical lines and a harmonious colour balance between space and composition narrate human emotions, joy, sufferings, and memories.

Born in 1943 in Jamalpur, Bangladesh, Monirul Islam spent his childhood in Sherpur and Kishoreganj. The family later settled in their home district Chandpur. As a child Islam would spend hours observing nature in the vast lowlands in Kishoreganj and the seemingly endless bank of the River Meghna in Chandpur. At the time, cinema posters were also a big attraction, which he faithfully copied and coloured.

Islam finished school late, at the age of 22, and then enrolled at East Pakistan College of Arts and Crafts. After graduation, he joined as a teacher in 1966. In 1969, he received a scholarship at Madrid Academy of Fine Arts. Since then the artist has been staying in Spain, but in no way has he been detached from Bangladesh. In the last 40 years Islam established his own artistic vocabulary which is referred to as ‘Monir’s School’ in Spain.

Islam was the first non-Spanish to receive the Calcografia Nacional Award of Spain in 1997. Notable among other awards are the 5th International Exhibition of Prints, Ibiza, Spain (1972), Carmen Arozamena Prize, Madrid (1974), International Graphics Exhibition in Yugoslavia (1977, 1987), the Bangladesh Shilpakala Academy Award (1985), Accessit National Award of Spain (1993), the Ekushey Padak (1999) and the Hamidur Rahman Smriti Puraskar, Dhaka (2007). He was a member of international juries in the Cairo Triennale (1999, 2003) and the Spanish International Prints Competition (2000). In 2010 he was conferred the Cross of Officer of the Order of Queen Isabella for outstanding contribution in art. He received the Royal Spanish Order of Merit in 2018. Monirul Islam divides his time between Dhaka and Madrid.