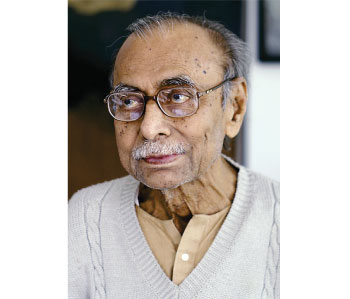 Mohammad Kibria was born in Birbhum, West Bengal, India, in 1929. A forerunner of the modernist movement in painting, he has been a significant force in shaping the destiny of art in Bangladesh. One of the pioneers of abstraction in this region, Kibria’s non-representative prints and paintings have been, for many, the measure of modernism.

Kibria graduated from the College of Art and Craft in Kolkata in 1950. Later, he had the opportunity to study painting and graphics at Tokyo University of Fine Arts, from 1959 to 62. His success was initiated by receiving the first prize in painting, in the National Art Exhibitions held in 1957 and 1958. He later received the President’s Medal for Pride of Performance in Painting in 1969. His brilliant performance in Japan got him the Starlem Award at the First Young Asian Artists Exhibition in Tokyo (1959) and an award in the All Japan Print Exhibition (1960).

In 1954, prompted by his teacher and mentor Zainul Abedin, Kibria joined the then Government College of Arts and Crafts (now Faculty of Fine Arts, University of Dhaka), as a teacher. By the time Kibria’s language of expression congealed into a viable vocabulary following the end of his apprenticeship in Japan, which left him emboldened enough to have mobilized his own sets of desire and to pursue abstraction in his art, the tumultuous 1960s dawned. Breaking away from the historically/culturally entrenched art practices of the 1950s Dhaka, when Zainul Abedin and Quamrul Hassan, along with other modern pioneers, were engaged in artistic creation that aspired to intersect Bengali identity with modern-day expressivity, Kibria chose to draw a new line on the horizon, showing only faint signs of location and lived experience. His art, though beholden to mid-century abstract expressionists, attempts at the voiding of contents, apparently is homage to the temperate abstractionist strategies that he encountered in Japan.

At home Kibria received the Silver Jubilee Award of the Bangladesh College of Arts and Crafts (1973), the Ekushey Padak (1983), the Bangladesh Charushilpi Sangsad Honour (1985), and the Independence Day Award (1999). To mark the 50th anniversary of fine art in the country, Bangladesh Shilpakala Academy conferred a special award on Mohammad Kibria in 1998. Kibria was a member of the international jury in the 12th Kuwait Biennale. He received the Japanese Foreign Minister’s Honour award in 2002.  After 45 years of teaching Kibria was made Professor Emeritus of the Faculty of Fine Arts, University of Dhaka, in 2008. Muhammad Kibria died in 2008.