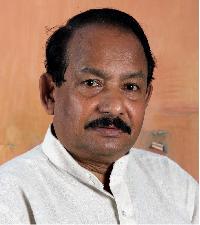 1945 – 2022
Mahmudul Haque was born in 1945, in Bagerhat, Bangladesh. His introduction to art was through illustrations in his textbooks, many of which were done by the noted illustrator Kazi Abul Kasem. At home he marveled at an uncle who was often busy decorating wedding venues with coloured paper. The women around the house stitched beautiful kanthas (embroidered quilts) and made decorative objects, and young Haque was drawn to the way the designs were formed and the colours chosen. Artist A K M Abdur Rouf’s (who later penned the constitution of Bangladesh in 1971) beautiful handwriting also roused his curiosity.

Haque finally enrolled in the Government Art Institute in Dhaka and completed an honours degree in 1968. His teacher Mohammad Kibria was a foundational influence and an inspiration in his work. Haque joined the Institute in 1969 and retired in 2010 as a professor in the department of printmaking. A government scholarship made it possible for him to complete a four-year post-graduation in printmaking from the University of Tsukuba, Japan, in 1984. This was followed by teaching stints in Japan, USA, Pakistan, Nepal, and India. In 1998, Haque became the director of the then Institute of Fine Art and in 2004, he was appointed director general of the Bangladesh National Museum.

The analytical quality of printmaking and the emotive aspects of painting come together in Haque’s abstraction. His marked preference for delicate textures, a serene palette and lines helped him to create a sensual visual language. Notable among his awards are the Best Painting Award, Tsuchiura City, Japan (1982), the Bangladesh Shilpakala Academy Award (1992), Honourable Mention Award, Asian Art Biennale (1991 to 1997), Lalitkala Academy Purchase Award, India (1994), 12th Kuwait International Biennale Award (1996), S M Sultan Padak (2006), and The Order of the Rising Sun (2019) from the Emperor of Japan.