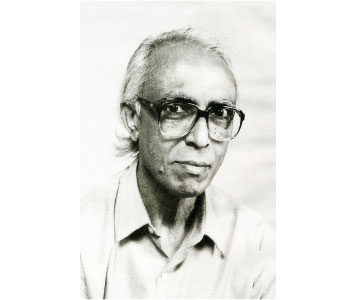 Kazi Abdul Baset was born in Dhaka in 1935. His early childhood was spent in Ramphal, Munshiganj, and the powerful memories of the cadence of rural life, the rivers and nature’s abundance, were foundational in his work. Schooled in the old part of Dhaka, Baset easily identified with the wit and wry humour of the Dhakaiya natives. He was moved by roadside scenes and events, and a visit to a painter’s shop who decorated glass panels for the roadside stall, remained etched in his mind. His teachers at school encouraged him to draw and that led him to join the Government Art Institute in 1952. The artist in him blossomed under the care of Zainul Abedin, Safiuddin, Anwarul Haque and Quamrul Hassan. He joined the Art Institute as a teacher in 1956.

Baset left for higher study at the Chicago Art Institute, in 1962. An abstract expressionism characterised his work in the sixties through to the seventies. Figurations with cubist overtones brought women, mothers, and daughters as predominant themes in his work. The image of a mother waiting for her son to return from the war is central to these.